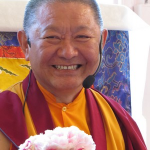 Ringu Tulku Rinpoche is a Tibetan Buddhist Master of the Kagyu Order. He was trained in all schools of Tibetan Buddhism under many great masters including His Holiness the 16th Gyalwang Karmapa and HH Dilgo Khentse Rinpoche. He took his formal education at the Namgyal Institute of Tibetology, Sikkim and Sampurnananda Sanskrit University, Varanasi, India and served as Tibetan Textbook Writer and Professor of Tibetan Studies in Sikkim for 25 years.

Since 1990 he has been travelling and intensively teaching Buddhism and Meditation, across the world at Universities, Institutes and Buddhist Centres.

He has also participated in various Interfaith and Science and Buddhist dialogues. He authored several books on Buddhism as well as some children’s books both in Tibetan and European languages.

Ringu Tulku Rinpoche is the Official Representative of His Holiness the 17th Karmapa for Europe and the Founder of KFE.

Horst-Günter Rauprich started practicing Buddhism in the eighties resulting in a new quality of life for him. After his retirement in 1989, he became member of the board of directors of the Karma Kagyu Trust Germany. Since then he has been working for the Karma Kagyu Lineage and His Holiness the 17th Karmapa.

He met His Holiness Karmapa in 1992, two weeks after His Enthronement in Tsurphu/Tibet. This first encounter was followed by biennial visits combined with pilgrimages in Central and West Tibet. At the request of the abbot of Tsurphu, he organised world-wide fundraising for the reconstruction of the Tsurphu Shedra in close cooperation with the Tibet Development Fund and all responsible offices and agencies in Central Tibet.

His greatest wish is to welcome His Holiness Karmapa in Germany at the Kamalashila Institute®.

He is an experienced general manager with long experience as a Banker and officer in the German Mountain Division, followed by a career as General Staff Officer in national and international headquarters.

He is married and has three children and four grandchildren. 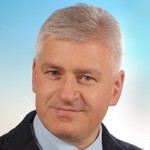 Thomas Szczygielski is the coordinator of the Marpa Institute, a nonprofit organization established in 1994 under the spiritual direction of Khenpo Tsültrim Gyamtso Rinpoche, one of the foremost living teachers of the Kagyu tradition of Tibetan Buddhism. The Marpa Institute’s purpose is to support the study, practice, and transmission of Buddhism in both the East and the West.

He has contributed financially to numerous Buddhist projects including the Buddhist Book Project for Poland.

Thomas Szczygielski has long professional experience in the protection of the environment and economy with focus on Coal Combustion Products (CCP) being chairman of the Polish CCP Union. He is involved in more than 200 conferences within the context of his expertise.

Lama Cheuky Sèngué (François Jacquemart) was born in 1949 and had his first encounter with Tibetan Buddhism in 1976. He accomplished a 3-year Buddhist retreat in France in the beginning of the eighties. He became a close student of the late Bokar Rinpoche and served him as an interpreter for a long period.

In 1985, he founded (and still directs) Claire Lumière publications dedicated to Tibetan Buddhism, translating, editing, and publishing a considerable number of books in French, mainly for the Kagyu Lineage.

He is also in charge of a few small Dharma centres (Aix-en-Provence, Avignon, and Grenoble) and teaches in France and Spain.

His Holiness the Karmapa requested him to translate into French the Kagyu Monlam Books, a task which was completed under His direction at the Gyutö Monastery.

Inès Wouters is responsible for the activities of the Bodicharya office in Brussels including the visits of Ringu Tulku Rinpoche.

She has contributed to the translations of many Buddhist texts into French including the book of Ringu Tulku Rinpoche :“Et si vous m’expliquiez le bouddhisme ? Les principes fondamentaux du bouddhisme tibétain”

Inès is a Barrister in Brussels, specialising in religious liberty, philosophical and economic law. She is also specialised in tax law, particularly international tax law; the taxation of small and medium-sized enterprises; donations and inheritance, and international commercial contracts and human rights.

She is also an administrator in Trans European Law Firms Alliance (TEFLA).