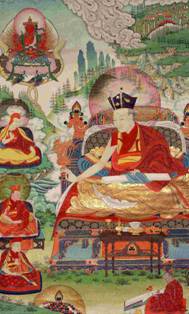 Mikyö Dorje is among the greatest scholars Tibet has ever produced. He was an active participant in the rigorous intellectual debates of his day, making major contributions in virtually all areas of textual study. He was an accomplished Sanskritist, and wrote Sanskrit grammars alongside works ranging from poetry to art to tantra. The Eighth Karmapa’s voluminous writings include substantial commentaries on all the principal Sanskrit texts, clarifying points of confusion and deeply engaging with their inner meaning.

The act of composing philosophical texts within the Karma Kagyu—a lineage so fully devoted to attaining realization through practice—is wholly unlike the act of producing philosophical texts in a modern academic or scholastic setting. Rather, the philosophical works of Mikyö Dorje point out the way to view reality in order to be liberated from the cycles of samsaric suffering. As such, his compositions are a supreme act of kindness.

It is said that Mikyö Dorje’s deeds in recording his insight and understanding in his commentaries had the effect of doubling or tripling the lifespan of the Karma Kagyu lineage.