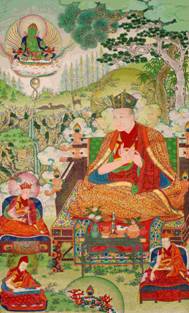 The widely learned Chödrak Gyatso introduced a formal study institute (shedra) into the Great Encampment itself, and similarly created a shedra at Tsurphu Monastery. An accomplished scholar, the Seventh Karmapa authored a number of influential commentaries on Indian philosophical treatises. His text on epistemology, the multi-volume Ocean of Reasoning, remains one of his most important works, alongside his commentary on the Abhisamayalaṅkāra, the Lamp of the Three Worlds.

While these formed his major deeds, Chödrak Gyatso’s varied activities to benefit beings also included bridge construction, the resolution of factional disputes and protection of animals. As had been the case in the Great Encampment since its inception, no meat whatsoever was consumed—or even allowed within the camp.