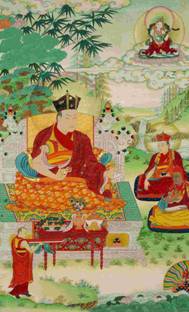 The Sixth Karmapa, Tongwa Dönden, was the first Karmapa in two centuries to decline the Chinese emperor’s invitation to teach at his court. After the actions of the Fifth Karmapa had laid the groundwork for centuries of peaceful relations between China and Tibet, the Sixth could remain on Tibetan territory, focusing his energy on matters closer at hand.

Throughout his life, the Sixth Karmapa engaged in meditative retreats, ranged across Tibet with the Great Encampment, from Kham to Kongpo to Ü, teaching large assemblies and restoring monasteries he found in disrepair.

As a major deed of that incarnation, the Sixth Karmapa brought about a profound invigoration of ritual and tantric practice in the Karma Kagyu. Tongwa Dönden began composing tantric rituals at an exceptionally early age, and produced a vast number of meditation and ritual manuals. By the end of his life, Tongwa Dönden had created an entire liturgical corpus, which to this day forms the basis for ritual activity within the Karma Kagyu lineage. His lasting contribution is enacted, and his enlightened activity is present, each time a Karma Kagyu practitioner recites one of the ritual compositions that arose in his mind.