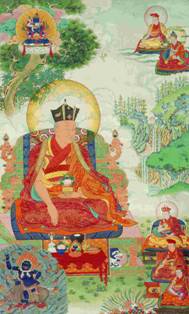 From early in life, the Fourteenth Karmapa displayed an aptitude for enlightened activity in a wide range of domains. He was renowned for his personal asceticism and strict observance of monastic discipline, inspiring those around him to reach his high level of practice as well. A skilled artist, he also devoted a good deal of his time to the writing of poetry. A lasting contribution of Tekchok Dorje’s creativity can be seen in the courtyards of Tsurphu and Rumtek monasteries to this day.

It was he who established the distinctive Padmasambhava ritual dancing (or cham) that became a Tsurphu tradition, as well as Vajrakīlaya cham dancing. The two ritual dance practices were maintained as part of Tsurphu’s tradition until 1959, when the Sixteenth Karmapa went into exile. Nowadays, both practices are preserved at Rumtek Monastery in Sikkim, while Tsurphu maintains only the Padmasambhava ritual dancing. Anticipating his involvement in his next life as the Fifteenth Karmapa, Tekchok Dorje played an active role in the Rimé, or Non-Sectarian Movement, that began to sweep eastern Tibet during his lifetime. He exchanged teachings with the Rimé masters Jamgön Kongtrul Lodrö Thaye (1813-1899), and Chogyur Lingpa (1829-1870).