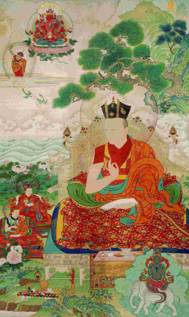 Also facing adverse conditions for the lineage, Jangchub Dorje invested great care in his ties to the major Karma Kagyu lineage lamas. He nurtured as his heart disciple the Eighth Tai Situpa Chökyi Jungne (1700-1774), also known as Situ Panchen in recognition of his enormous erudition. The Eighth Situpa became a great patron of the arts, as well as a productive scholar, who edited and oversaw the carving of the woodblock editions of the Kangyur and Tengyur canonical collections at Derge Monastery in Kham.

Taking his heart disciple Situ Panchen as well as the Eighth Shamar Rinpoche and the Seventh Goshir Gyaltsap Rinpoche with him, the Twelfth Karmapa undertook a pilgrimage to Nepal and India. Arriving in the Kathmandu valley, they were received with great honors by the Nepali king. At the time of the Karmapa’s visit, an epidemic was sweeping the valley, which he was requested to dispel. He performed a blessing ceremony connected to Avalokiteśvara, and the epidemic did end, earning the king’s devotion and gratitude. Meanwhile, Situ Panchen, a learned Sanskrit scholar, was able to debate with local pandits in Sanskrit. After teaching in Nepal for some time, Jangchub Dorje and his party continued their pilgrimage, visiting sacred Buddhist sites of India.