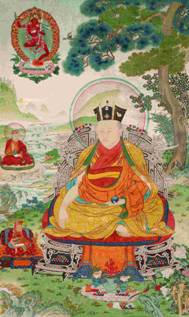 Since the time of Dusum Khyenpa, the Karmapas frequently took rebirth in Kham, established ties with Karma Kagyu monasteries in eastern Tibet, and then made the long trek to take up residence at Tsurphu Monastery in central Tibet. This allowed the Karma Kagyu lineage to retain strong ties across widely dispersed geographical territories. Yeshe Dorje followed this pattern, and soon began engaging in the traditional activities of the Karmapas. After his formal enthronement at Tsurphu, he performed the Black Crown Ceremony, took ordination, received the transmissions of the lineage and studied the scriptural texts. He took teachings from Nyingma as well as Kagyu masters, including Yonge Mingyur Rinpoche.

Like Chöying Dorje before him, Yeshe Dorje enjoyed far less conducive conditions than previous Karmapas for acting to benefit the world widely. However, he acted fully on whatever terms he found, repairing the extensive damage that had been done to Tsurphu by the Mongolian army, caring for his disciples and training new lineage lamas. Yeshe Dorje was the shortest-lived of all the Karmapa reincarnations, passing away at the age of 27. During his brief lifetime, he worked with quiet determination to protect what had been left to him by the vicissitudes of history.