HH Karmapa’s visit to the Bodhicharya center in Berlin 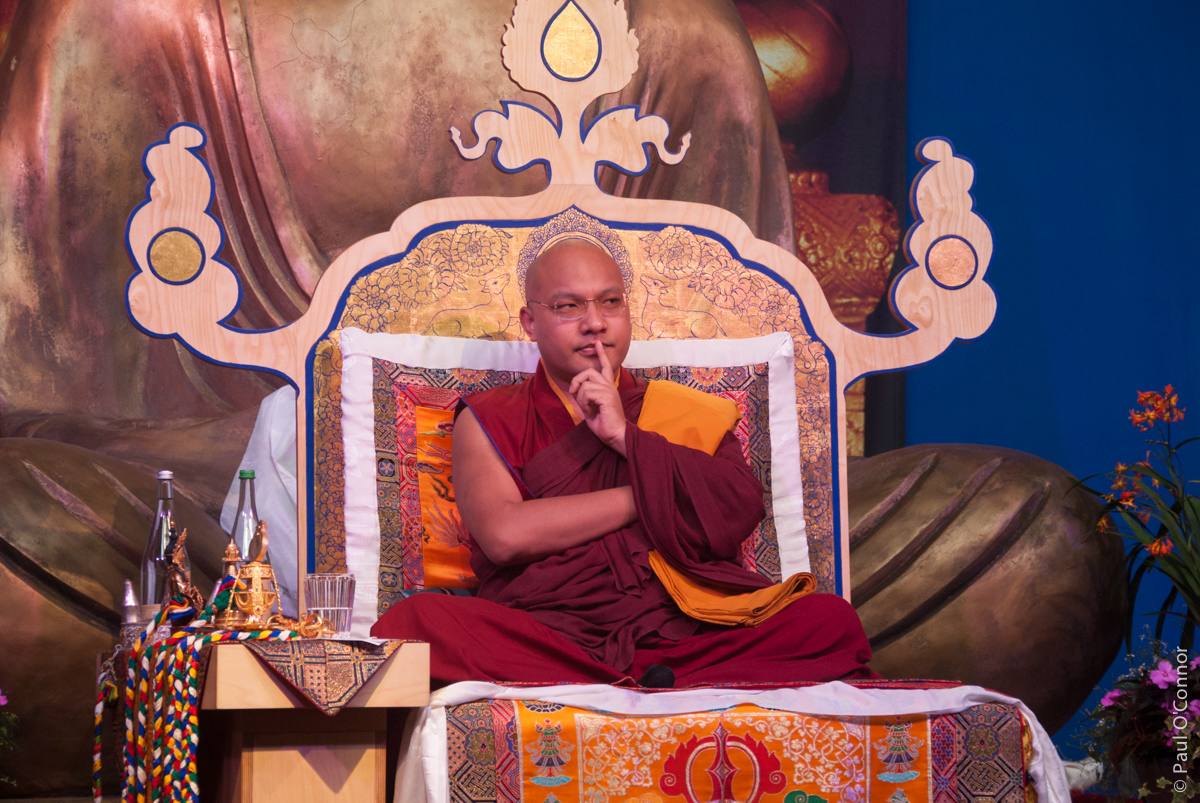 More than 350 people comprising representatives of Bodhicharya centres across Europe, members and supporters of the Berlin centre, and invited guests crowded into the main shrine room to greet the 17th Karmapa on this his final teaching engagement during his second visit to Europe. A distant sound of Tibetan gyalin announced his arrival at the centre. His Holiness was greeted at the gates to the centre by its founder Ringu Tulku Rinpoche, who escorted him along the brick path through the buildings, preceded by a boy and a girl scattering flower petals. After planting a tree in the garden, His Holiness made his way to the shrine room.

Ringu Tulku Rinpoche welcomed the 17th Karmapa once more to Bodhicharya Berlin and confessed, “We didn’t make any progress with the building, but,” he continued, “we are determined to work for the people here and for the Dharma.” He highlighted in particular the programme of hospice training and the volunteers who cared for the dying–currently they are looking after thirty people–and presented His Holiness with a list of names of the dying and those who had died, requesting prayers for them.

As at previous centres during this visit, the Karmapa took the role of chant master and led everyone in the opening prayers. There was a simple mandala offering.

After greeting everyone and expressing his delight at returning to Bodhicharya Berlin once more, His Holiness commiserated with everyone over the lack of progress in constructing the centre. “It just shows that it is not an easy undertaking to establish a large Dharma centre in a huge city like Berlin,” he said, then thanked Ringu Tulku Rinpoche and the members and said how much he appreciated their efforts and the work they were doing.

As this would be his last teaching during his 2015 visit to Europe, the 17th Karmapa chose to return to the theme of how we must integrate the practice of the Dharma into everyday life. “I would like to talk again about what is really indispensable on the path, and what the heart essence of Dharma practice is,” he explained. 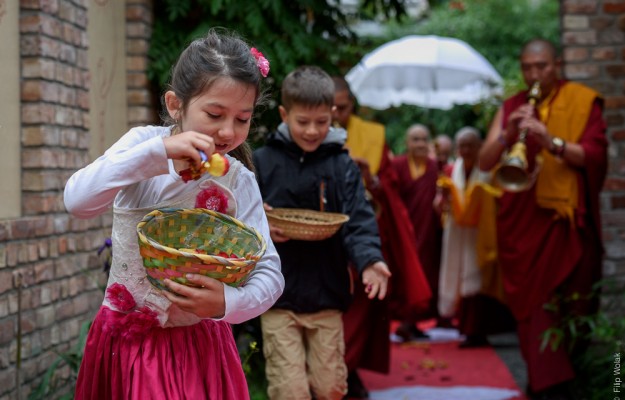 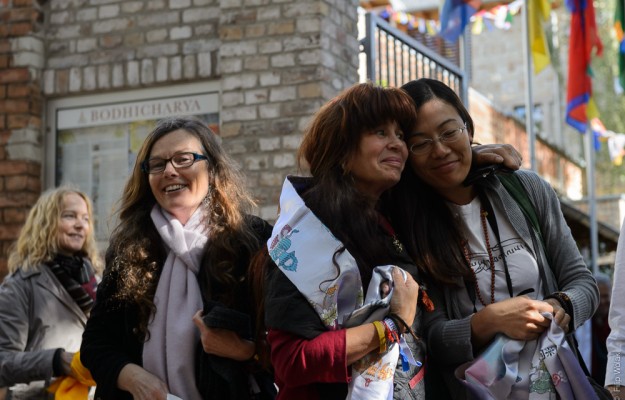 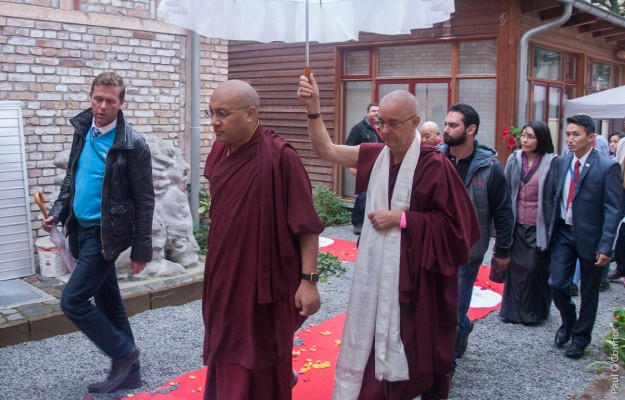 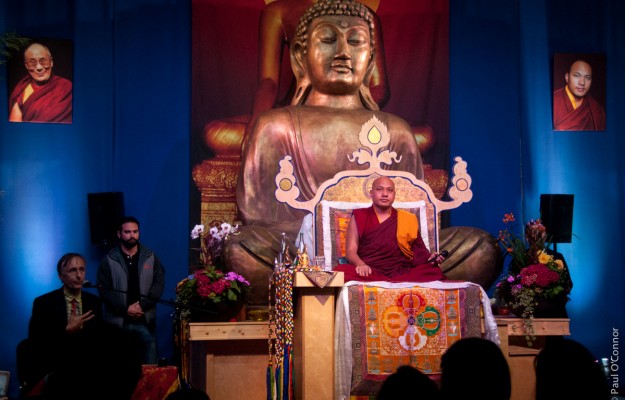 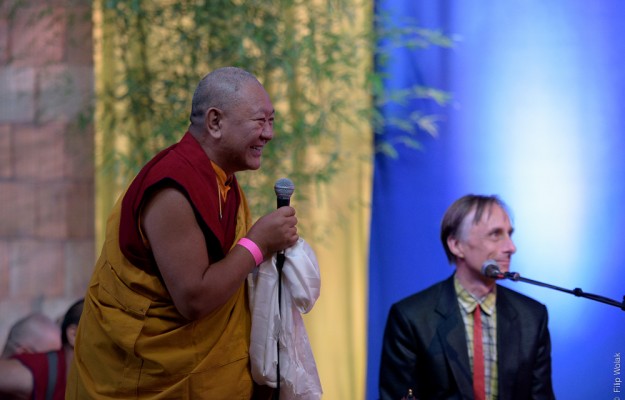 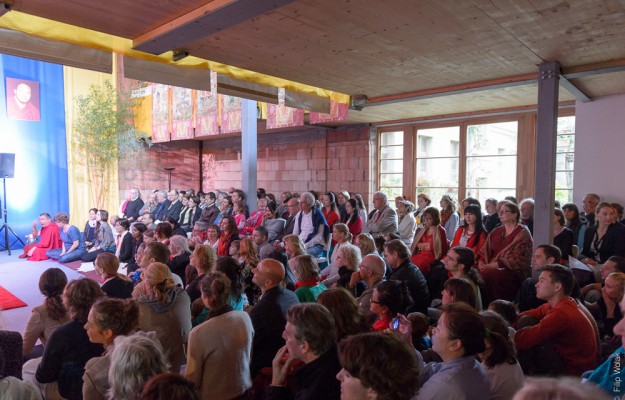 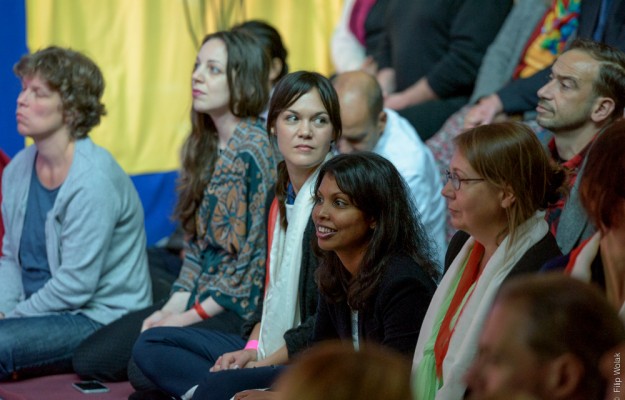 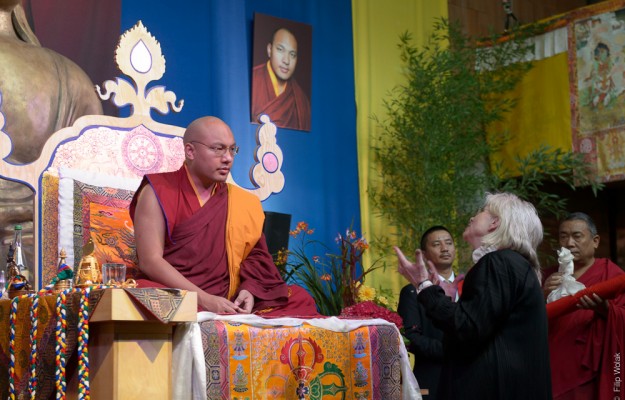 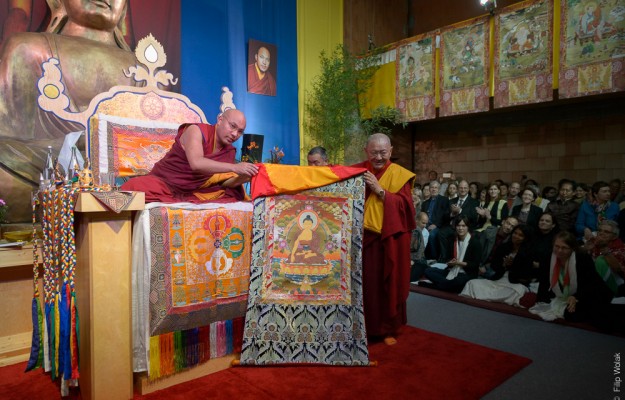 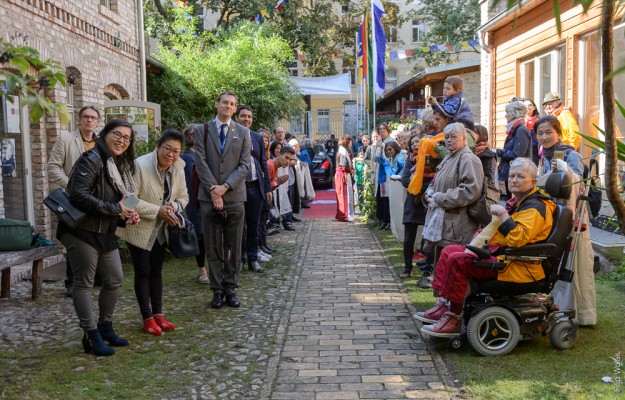 His first point was that we should strive to make our lives meaningful, based on an appreciation of their preciousness. “All Dharma practice should support this goal,” he said.

His second point was that, unfortunately, we often restrict our practice to a particular time when we say prayers or meditate, and then the rest of the time we are busy with our day-to-day life. If we compare the time spent practising with the time spent on other activities, it is obvious that this is not what might be called a successful Dharma practice. If our Dharma practice is to be successful, the Dharma has to permeate our lives, and not be restricted to a certain time of day spent in our shrine room. “We have to connect ourselves with the essence of the Dharma in all the other parts of our lives, right there where we live and work,” His Holiness emphasised.

Reflecting on the increased interest these days on meditation, His Holiness suggested that for many it had become “a break from the stress of their busy lives, what might be called a ‘spiritual vacation’” and that this type of practice “is linked to an experience of relaxation and well-being that we could call a ‘spiritual massage’.” People expected their practice to produce an experience of well-being, but it was questionable whether this could be called true Dharma practice, because true Dharma practice is not an analgesic, and viewing it as such might cause more pain in the long run. When we truly engage in Dharma practice, we work with our body, speech and mind. Particularly when we work with our mind and consciousness, we should foresee obstacles and times of difficulty and unhappiness. We may even reach a point where we think that we can’t go on. “We should expect these difficulties and obstacles,” His Holiness advised, ”and be prepared to joyfully accept them and taken them on to the path, but that is not easy.”

Some people mistakenly believe that the purpose of Dharma practice is to have a direct encounter with a yidam or meditation deity, or to gain some power or energy through this. However, such experiences are not the way to turn our lives into something meaningful and precious.

“The most important way in which we can turn our lives into something precious and meaningful is to learn how to really benefit others,” the Karmapa commented, “and to ensure that our ability to help and benefit other sentient beings grows, and that, with all our hearts, we aspire to become a good human being who works for the benefit of others.”

At all times we should guard against arrogance. It seems that some people believe practising Dharma sets them apart and makes them special in some way, superior to all those who don’t practice Dharma, the Karmapa warned, and to illustrate the point, he recounted the fable of Gold and Mud.

Once upon a time Gold and Mud had a conversation. Gold looked down at Mud and said, “Look at me! How I shine! How beautiful I am! What value do you have? You are so dirty and you stink. In fact, you are thoroughly disgusting. What do you have to say for yourself?”

“Well,” Mud replied, “Perhaps I’m not all bad. Lotus flowers grow from me. Can you grow lotuses? And vegetables, mushrooms, and lots of other plants all grow out of me. I give them strength and feed them. What can grow from you?”

Gold had no reply.

“What we learn from this example is that rather than turning ourselves into something special, it is much more important that through us something more useful and helpful is created in this world,” His Holiness commented. “We should contribute to the well-being of other sentient beings; we should become a catalyst for good in the world. This is what is needed.”

With these words, his Dharma talk ended, and after thanking everyone again and reiterating his hope that next time he would be able to visit other countries in Europe and meet Dharma friends there, he presented the centre with a signed thangka of Shakyamuni Buddha.

Following the teaching, many of the members from across Europe were able to have a private audience with His Holiness. They queued good-naturedly on the path outside the main house until their turn came to climb the narrow wooden staircase to the fourth floor, squeezing past those on their way down.

Then, all too soon, mid-afternoon, the 17th Karmapa left the centre to return to his hotel. He smiled and waved goodbye to the hundreds of people milling around the path and gate and along the road outside the centre, who had waited patiently for a final glimpse of him. The official programme of his second visit to Europe had reached a successful conclusion.

Bodhicharya Berlin is located in the former East Berlin. Originally an old farm which had fallen into disrepair, it is a protected site because of its historical importance. Much love and support has gone into the refurbishment of the buildings, stage by stage. The vision is to create not just a centre for Buddhists, but a welcoming space for inter-faith dialogue and activities which enhance physical, mental and spiritual well-being such as yoga and Tai chi. already, an important part of the work of the centre is hospice training and looking after people who are dying.

You can find out more about the Bodhicharya Berlin Shrine Room Project here.

You can watch this teaching, and all the others from the 2015 Europe Visit, here.