The Gyalwang Karmapa Meets World Culture in the British Museum 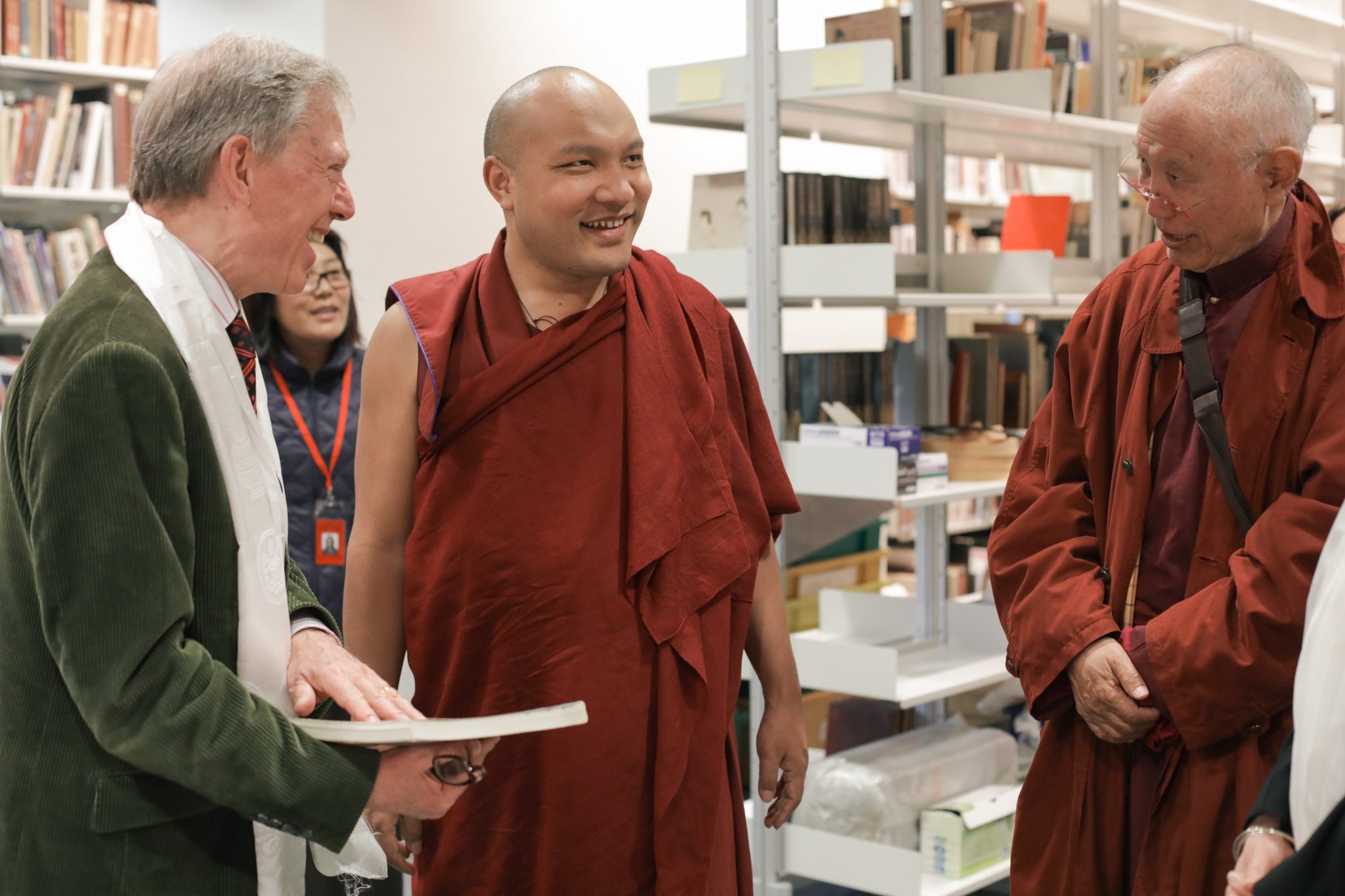 The day after he arrived in the Fair Isle, the Gyalwang Karmapa was invited to the British Museum, home to perhaps the greatest display of human culture and history to be found anywhere. Passing through its giant colonnade and portico, the Karmapa entered the several miles of galleries, which present eighty thousand exhibits selected from its thirteen million objects. Brought from all over the world, including Tibet, these treasures of art and related artifacts reveal the vast variety and richness of the world’s culture.

Accompanied by a retinue that included Chime Rinpoche, Dechen Rinpoche, and Ringu Tulku, the Karmapa was guided on his tour by Richard Blurton, Curator of the South Asian Collections, and accompanied by the Deputy Director, Joanna Mackle. They had arranged a special exhibit of paintings, statues, and artwork, usually not on display. These articles were related to the Buddhism of Tibet, India, and China and laid out on a table in the spacious research offices.

The first piece the Karmapa saw was the inside of a large wooden book cover, richly painted in warm hues of red, orange, and yellow depicting the embodiment of wisdom, Prajnaparamita, in the center with rows of bodhisattvas and monks on either side of her. The next piece was an album of photographs from the Tibet of yore, mainly showing the monasteries, homes, and aristocratic residents of old Lhasa. With a light smile on his face, the Karmapa looked carefully at each page, often identifying the places he knew. Richard Blurton mentioned that when he shows these images to older Tibetans, they are sometimes able to recognize their relatives, dressed in their best chupas and jewelry for the photographer.

After looking at statues of Vajrasattva, Manjushri, and Akshobhya (an important deity for the Karmapa), he was shown a magnificent statue of Shakyamuni Buddha in the earth-touching mudra with a delicate and elaborately carved backplate, pierced with fire and flower scrolls. The curator’s notes on this piece state, “It is one of the largest and most lavish Yong’le-period Sino-Tibetan bronzes.” These notes also state the Yongle Emperor invited a Tibetan lama to perform rites for his parents in 1407, and this turns out to be the very year that the Fifth Karmapa, Deshin Shekpa, arrived in the Yongle court at the repeated invitations of the Emperor.

Texts describe this event: “When Deshin Shekpa finally arrived at the palace in 1407, three hundred fully caparisoned elephants carrying members of the Sangha came out to greet him. On that day, the supreme emperor came from the palace to its outer wall. He offered the Karmapa a thousand-spoked wheel made of gold and a white conch shell that turned clockwise. When the Lord of Dharma took out a similar white conch shell from the folds of his robes and gave it to the emperor, his faith increased even more.” (From The Karmapas and Their Kagyu Forefathers.) Given this coincidence it could very well be that the Karmapa was seeing the same statue that his predecessor Deshin Shekpa saw in the early fifteenth century.

After viewing the remaining art of a banner, stupa, images of an arhant and Chenrezik, the Karmapa was invited outside to see highlights of the Museum’s exhibits. These included the famous Rosetta Stone, key to deciphering the Egyptian hieroglyphs, and the world famous Elgin Marbles from Greece. The Karmapa seemed perfectly at home amidst these treasures of world art, filling long galleries, and of knowledge, contained in libraries of leather-bound books enshrined in two-story bookcases. He listened attentively as the exhibits of the beginnings of archeology and the deciphering of ancient scripts were explained. Crowds of school children and tourists passed by, curious to see him as well. Afterward, the Karmapa passed into the main courtyard with its swirling domed roof and out into the front plaza where his car waited to take him through London’s elegant streets back to his hotel.