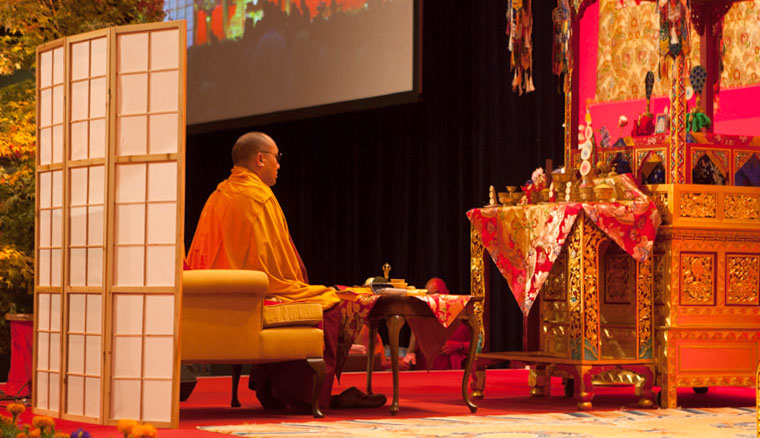 The stage has been transformed into a radiant platform, the setting for an impressive throne of gilded, carved wood and an elegant pavilion whose four corners are marked with slender columns and brocade victory banners. Its fluted, double roofs are decorated with a frieze of Dharma wheels and banners; beneath them is the space of the main altar that holds a large Karmapa Pakshi torma flanked by two offering vases. On a brocade-covered table in front are the seven offering bowls and smaller tormas. A Japanese shoji screen is set up in front to shield His Holiness as he makes his preparations for the empowerment. Floating above this area, suspended from the ceiling is a stunning painting of Karma Pakshi, a vajra in his right hand and a dagger in the left, surrounded by the main deities of this practice, including Dorje Pakmo, Hayagriva, Rechungpa, and Mahakala. Copies of a Karma Pakshi thangka had been available for days before the initiation so people could become familiar with it.

After finishing the preparation, the Karmapa left briefly as the shrine was rearranged. He then returned to begin the empowerment and soon paused to give a brief explanation. He shared the fact that he has had a bit of a fever and that his eyes were burning, and said in jest, “Maybe I should stay in Germany,” which was greeted with great applause.

He went on to explain that this initiation was for the mahasiddha (accomplished master) Karma Pakshi (1206–1283), usually known as the 2nd Karmapa. The text for the initiation and the related practice was discovered by the treasure revealer Mingyur Dorje. Contrary to the usual understanding, the Karmapa stated that in fact, Karma Pakshi was really the first Karmapa because during his time, the name Karmapa became famous. The one usually known as the first Karmapa, Dusum Khyenpa, had a pure vision of the Black Hat and wore a copy he had made.  Later, the lineages of these two first Karmapas were blended together into one transmission.

Karma Pakshi was born into the family of a yogi belonging to the Nyingma tradition of the Secret Mantrayana, the oldest one in Tibet.  He practiced in this tradition and then met Gyalse Pomdrakpa, an important student of Drogön Rinchen, who in turn was a close disciple of the first Karmapa. It was Pomdrakpa who gave Karmapa Pakshi the transmission of Mahamudra (the Great Seal), which he then combined together with the Nyingma practice of Dzogchen (the Great Perfection), and continued to practice both of them.

Guru Rinpoche, the great Nyingma master, is famous for all the miracles he displayed, through which he was able to tame both humans and spirits so that Buddhism could spread in Tibet. Similarly, Karma Pakshi was a powerful lama who performed many miraculous feats and also tamed the Mongolian emperor of the time.

The sadhana of Karma Pakshi, which is a guru yoga, shows him as the union of all the gurus, yidams, dakas, dakinis, Dharma protectors, and guardians.  The practice came from Mingyur Dorje who was a treasure revealer. The Karmapa explained that since the time was short and all the conditions were not present, he would just give a blessing initiation today. The Karmapa then bestowed the empowerment in five parts: the vase initiation, the initiations of the yidam’s speech, mind, qualities, and activities.

Afterward, as a thanksgiving, a ceremonial offering for the Karmapa’s long life was made by Horst Rauprich for Kamalashi Institute and Christina Uekermahnn for Bodhicarya, representing the main organizers, and then Lama Yeshe offered a beautiful, tall Vajradhara statue. This was followed by an offering of statues representing the whole Golden Garland of the Karma Kagyu masters.  A very special gift, the Karmapa explained, came from Sogyal Rinpoche who had loaned a small drum (damaru) that had belonged to Karma Pakshi himself and come down through Jamyang Khyentse Chokyi Lodro, a great master who had traded empowerments with the 16th Karmapa. The present Karmapa played this drum during the initiation, and at the end, reverently lifted it to his forehead.