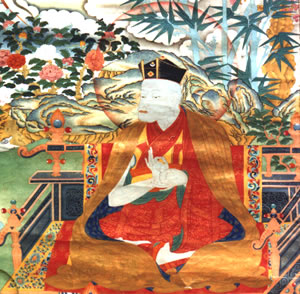 Thus the Gyalwang Karmapas have carried the authentic Buddhist teachings in an uninterrupted lineage of seventeen reincarnations into our modern world.

Both the historical Buddha Shakyamuni, and Guru Rinpoche who brought Buddhism to Tibet from India, prophesied the arrival of a master who would be known as the Karmapa. Throughout the centuries, the Karmapas have carried out activities of enlightenment. The Karmapas have worked to alleviate and remove suffering and promote the happiness and contentment for all living beings. The Karmapa’s purpose is to manifest unconditional compassion in a direct, accessible way. For centuries, the Karmapas have been sought out as spiritual supports, protectors, and supreme mentors by lay and monastic Tibetans from every region. Traditionally, it is said that the Karmapa attained enlightenment many eons ago as the Buddha named Shenphen Namrol.

The Gyalwang Karmapas manifest the enlightened activity of all the Buddhas and embody their wisdom and compassion. It is for this reason that they are called Gyalwang, which means victorious or kingly. For their followers they are a living example of the intrinsic Buddha nature that is present in every sentient being. This potential for complete enlightenment can be awakened in everyone and eventually leads from the suffering of samsara to freedom, which is the realisation of mind’s deepest, pure nature.

The present 17th incarnation of the Karmapa is His Holiness Orgyen Trinley Dorje, who was born in Tibet in 1985. He is a leading spiritual master of the 21th Century, with a remarkable ability to make the Buddhist teachings relevant in today’s world. His spiritual realisation and his presence, as well as his charisma, clarity and candour captivate old and young alike.

His Holiness is now living in Gyuto Monastery in the Dharamsala region. Thousands of Tibetans, Indian, Nepalese, Bhutanese, Asians, and Westerners visit His Holiness year round.

For an overview of Buddhism, (the Buddha, Buddhism in India and Buddhism in Tibet) please refer to:
http://www.kagyuoffice.org/buddhism.html